by AJ McGuire August 9, 2018
A hearing assistive device must not be noisy.  At minimum, noise will be annoying.  At worst, noise will harm, not help a person's ability to hear.  So, for our Tympan device, I want to make sure that it has low self-noise.  In this post, I show how the microphone that you choose can strongly affect the apparent noise of your system.  Spoiler: be careful with lapel mics because they can be very noisy! 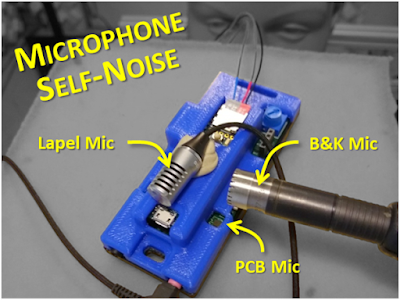 Goal:  I want to measure the self-noise of different microphones in combination with the Tympan.

Hardware:  As shown in the picture above, I am testing with a Tympan Rev C, which includes built-in microphones (Knowles SPH1642) on its PCB.  I also made recordings with a Sony lapel microphone (ECM-CS10) plugged into the Tympan's microphone jack.  As a reference microphone for the calibration, I used a B&K 2250 sound level meter (SLM) with its 4191 microphone element.

Setup:  I performed the recordings in our single-walled acoustic test chamber in the basement of our building.  It is fairly quiet, though it is not as quiet at the lowest frequencies (125 Hz and below).  As shown in the figure at the top of this post, I put the lapel microphone and the B&K microphone very close to the Tympan's built-in PCB mic.

Calibration:  To calibrate the microphones, I played white noise into the sound chamber.  The B&K SLM recorded the audio in calibrated units, as shown in the first plot below.  Simultaneously, the Tympan recorded the audio (through each of the two microphones) in uncalibrated units, as shown in the second plot below.  By comparing the raw Tympan levels with the calibrated B&K levels, the bottom plot shows the sensitivity of the Tympan+microphone at each frequency. 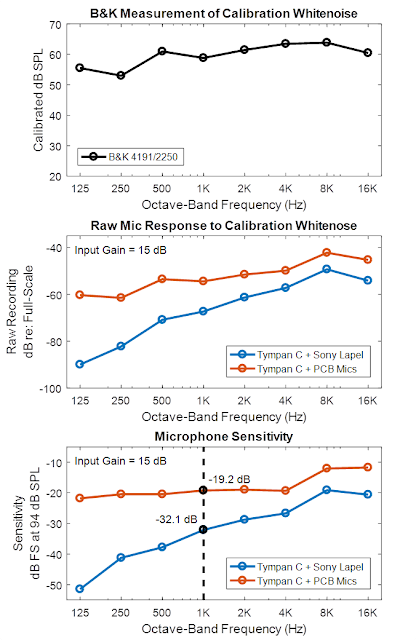 Self-Noise Expressed as SPL:  The first plot below shows the raw, uncalibrated noise levels recorded by the Tympan.  To convert these values to SPL, I need to apply the calibration data discussed above.  There's a couple ways that I could apply the calibration.  The middle plot shows the estimated SPL if I were to have calibrated the Tympan only at a 1 kHz, which is a common, simple way to calibrate a device.  Alternatively, if we use the full frequency-dependent calibration for the Tympan, the bottom plot shows the estimated SPL.  Using either calibration approach, the conclusion is the same: the Sony lapel mic has much higher self-noise than the built-in PCB mics! 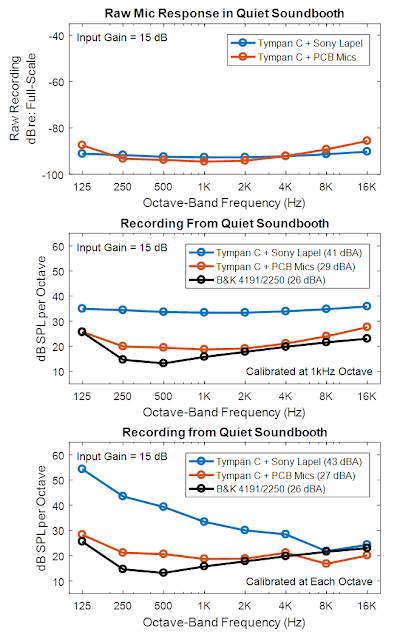 The Microphone Matters!  Getting quantitative, I can summarize these spectra by applying an A-weighting curve and computing the broadband sound pressure level (ie, "dBA").  From these recordings, the Tympan + Lapel Mic has a self noise equivalent to an ambient noise level of 41-43 dBA (depending upon the calibration approach).  By contrast, the Tympan + PCB Mics show a noise level of between 27-29 dBA.  This 14 dB difference is a big!

Conclusion:  Since low self-noise is good, the Tympan's built-in PCB microphones seem to be a better choice than this Sony lapel microphone.  I look forward to trying other microphones to see if I can get even lower self-noise.

Follow-Up: What Self-Noise Should Be Expected?  After completing this post, I realized that I should have looked at the microphone datasheets to see what the manufacturers say about each microphone's self-noise.  Here's what I found: